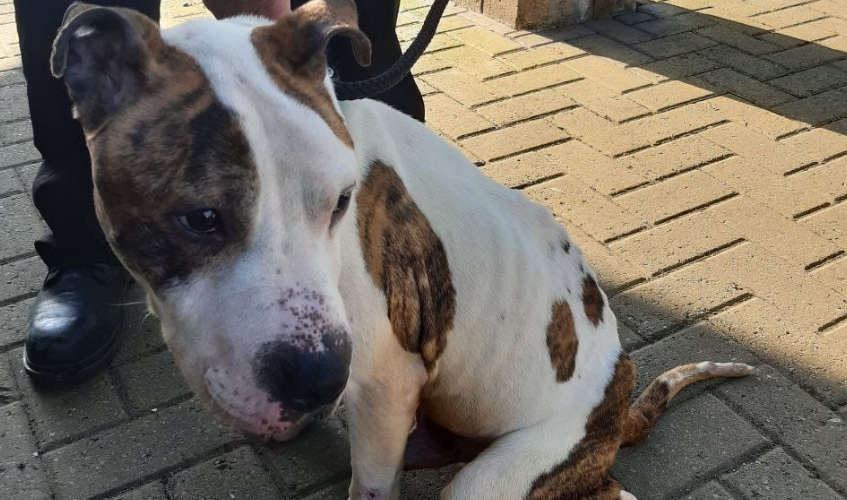 A couple from Falkirk are to carry out 300 hours of unpaid work, after failing to look after their pet dog.

Michael Nisbet and Rebecca Ward have also been banned from owning animals for a combined period of 15 years.

The dog developed sores and lost hair after being neglected.

Inspector, Andrew Gray, said, “On 12 April 2021, we responded to a concern for a dog that was described as extremely thin with protruding bones.

“We attempted to visit and call a few times but were unable to reach the owners. However, I could see a dog in a cage through the kitchen window. Only the dog’s head was visible and I couldn’t determine body condition or if provisions were available for the dog.

“On 24 April 2021, we visited the property again and were met by Ward. A dog matching the description we’d received appeared at the door in a very thin state with staining on his legs and underside.

“We took Zeg, a five to six-year old white and brindle Staffordshire bull terrier, to be examined by a vet.

“The vet found Zeg to be significantly underweight at just 19.8kg. A healthy weight for this size and breed of dog is 25 to 30kg. Zeg was also suffering from chronic muscle wastage over his head, legs and body.

“His ribs were clearly visible through his skin and he had pressure sores over his joints. These lesions were thickened which suggest laying on hard surfaces for long periods of time.

“The hair loss and skin damage on his tail indicated long-term caging in a small environment. There were pressure sores which were close to ulcerating over his pelvic area due to lack of muscle and fat coverage to protect the skin.

“When Zeg was fed, he ate ravenously with no difficulty swallowing. The vet concluded that there was no clinical reason to explain why Zeg was so underweight. Sadly, his condition suggests months of chronic malnutrition and inappropriate housing which caused him unnecessary suffering.

“Neither Nisbet nor Ward, have responded to repeated attempts to contact them. In the year that Zeg has been in our care they have also never enquired about how he is doing.

“We’re glad that Zeg is out of the situation that caused him so much suffering and we’re pleased that Nisbet and Ward have been given lengthy bans on owning animals. Their sentencing means that Zeg can now start looking for his forever home.

“If anyone is concerned about an animal, they can contact our confidential animal helpline on 03000 999 999.”